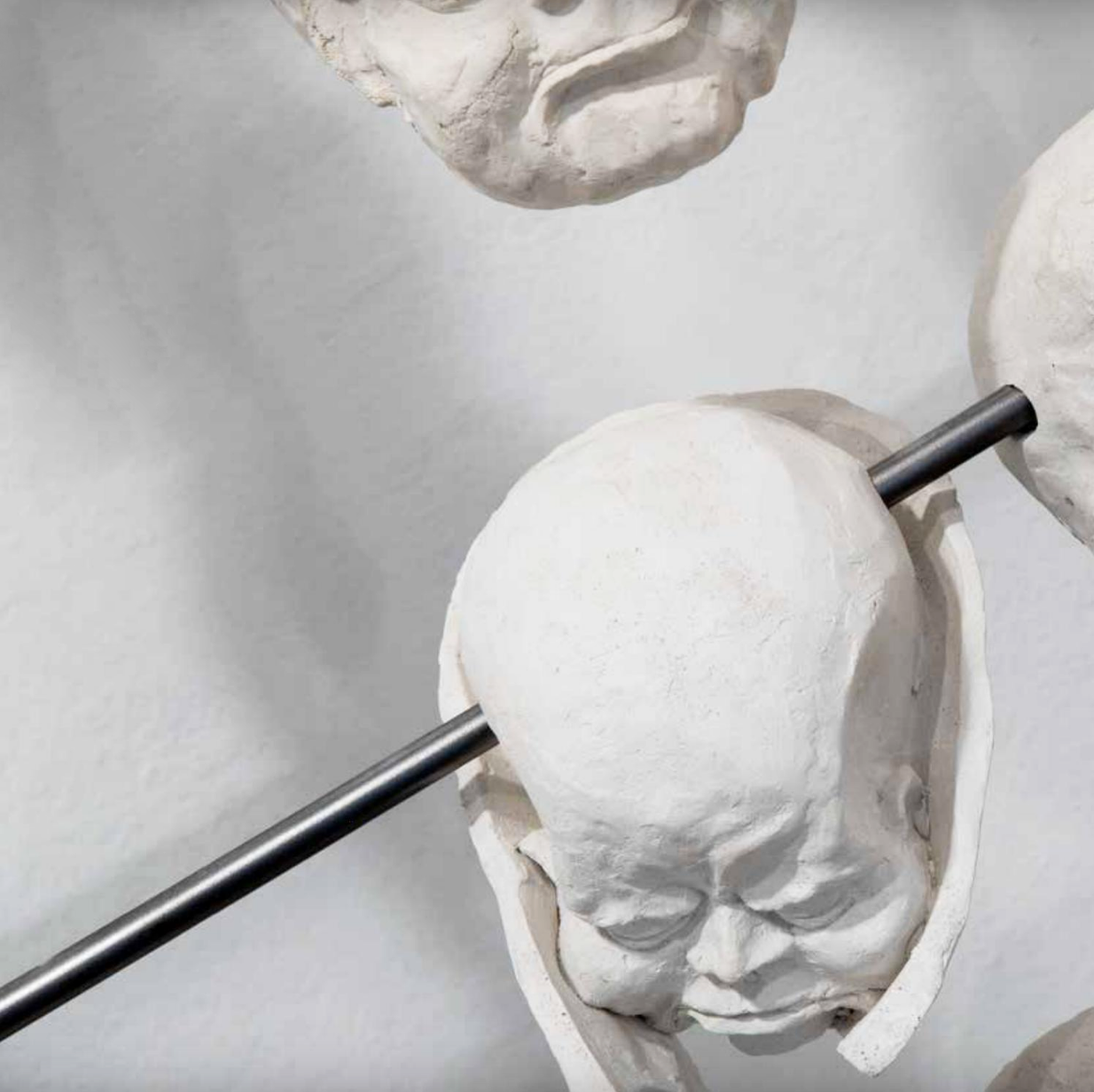 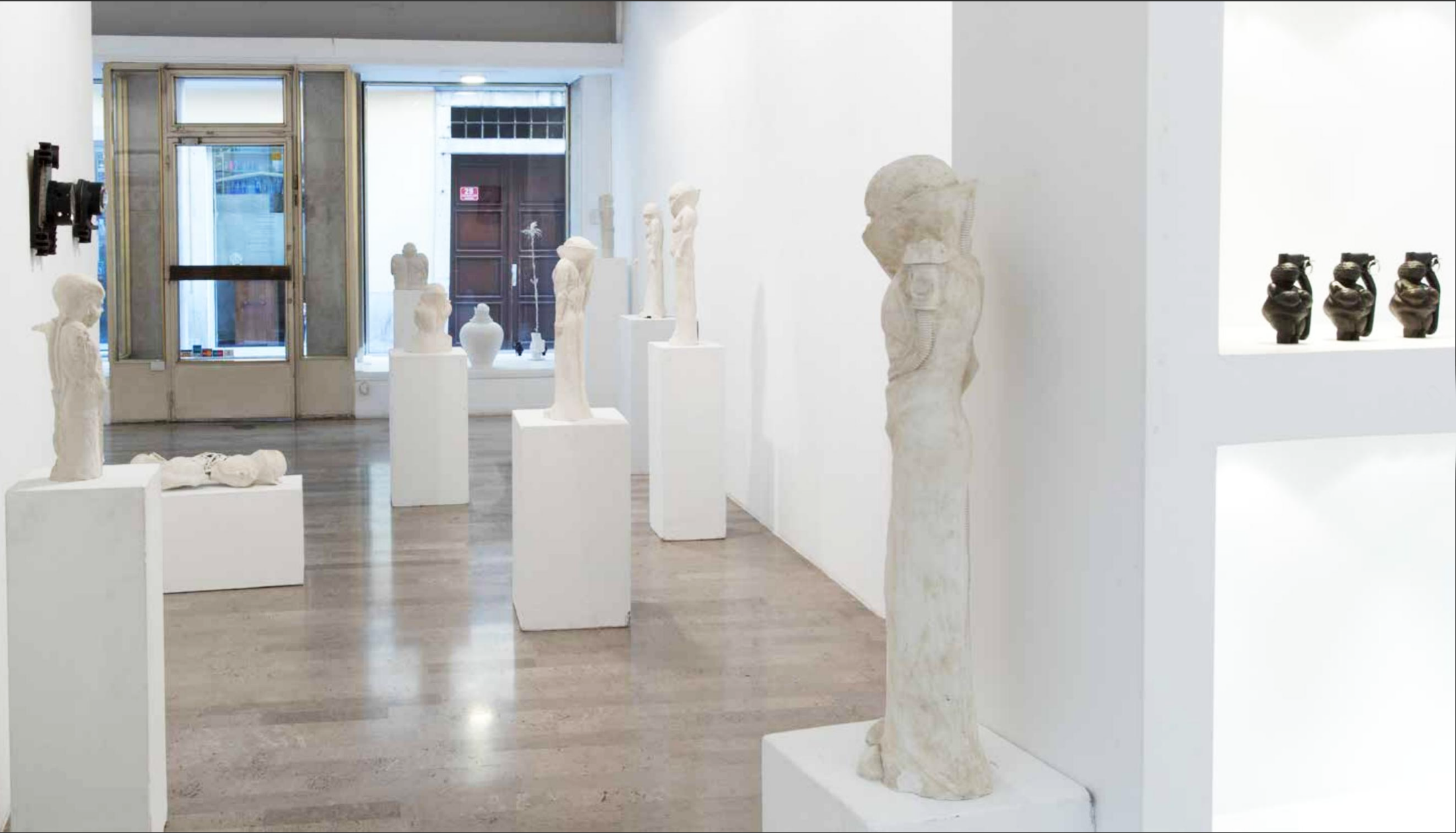 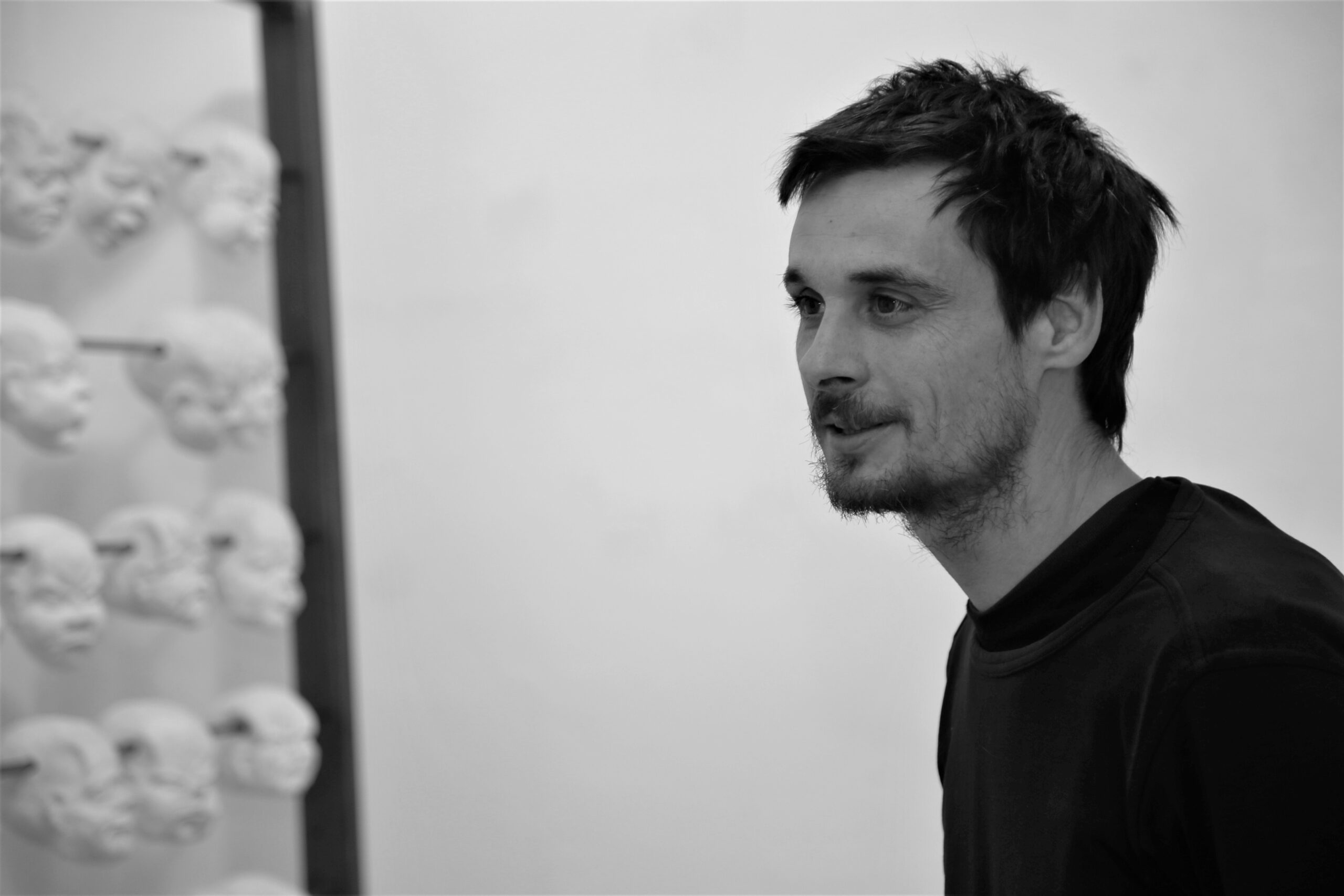 Rok Mohar is a talented and witty artist who accomplished in maintaining that passion and dedication typical of youthfulness. For his creative dedication, the experience he gained by collaborating with other artists, at various artistic gatherings and projects was as important as his academic studies. Art for him is a way of life and thinking. Being a socially responsible artist, his works draw our attention to current social, political, environmental, and other issues that are important for the individual and for humanity. He problematizes them with various satirical, narrative, or poetic contents. He conveys them with irony, making us reflect with his witty artistic language.
He likes to experiment with various and innovative materials, but he has a special connection with stone and clay. Stone sculptures of larger formats were created at sculptural symposia and outdoor workshops, while the studio allows him to make statues of smaller dimensions and small plastics, mainly from clay and plaster. He also works with particular and unusual materials as Styrofoam, in particular when he models theatrical props or scenographies.
The Chernobyl project relates to the Chernobyl nuclear disaster of 1986. Mohar points to the long-term and tragic consequences of the disaster, which severely affected man and nature, not only in the surrounding geographic area, but throughout all Europe. Reviving memories of a tragic event is primarily a reflection on the current state of the civilized world, which is facing greed, consumerism, and the unconsidered risks that come with technological advances. This distorts his view of reality, depriving men from any responsibility towards each other and towards the environment.
The exhibition includes sculptures created in the last five years. In his creative process the plastic images, which the artist first shapes in clay and then transforms in plaster castings, were created spontaneously, without a conscious planning. Nearly two hundred human heads and figures are gathered together. Deformed bodies and disfigured faces reflect something chaotic and grotesque, and trigger unpleasant, gloomy feelings in us. The sculptures reflect the author’s lush imagination and are imbued with rich symbolic value: dresses with accentuated collars represent a totalitarian military regime and a personal fascination towards Napoleon’s military uniform; the spiral plastic tube found in the gut symbolizes the protective masks used for cleaning nuclear waste. At the same time, multi-layered readable content is also hidden in titles such as Narcissus, Siamese Twins, Liquidator, Plumber, General Nikolai Tarakanov, Balzac… The central, strongest element of the exhibition is the sculpture entitled I PODn. It is a two-meter abacus, a mechanical computer with a metal structure on which are densely displayed balls in the shape of human heads. The nameless faces of children with closed eyes are stuck and defying fate; in their blindness they even feel at ease. Behind the ironic expressions of indifference and pleasure, however, lies complete helplessness. Symbolically, man is just another number with which fate can easily play with whenever it wants.
The project upgrades and explains the content of the Chernobyl Paper , a manifesto by the children of the Chernobyl nuclear power plant , who draw attention to themselves and warn us against oblivion. Although written provocatively, with a humorous and ironic tone that slightly softens the weight of the serious argument, it has a strong impact. Real facts and ideas are intertwined with utopian desires and unrealistic expectations of a healthy and just society.

The exhibition also shows some of the latest sculptures of the author, a series entitled Atomic Gods. The atom is the basic building block of matter; it is therefore a creator, a god, and science (physics, chemistry, mathematics) is the only universal religion accepted by the author. Mohar travels through space and time, discussing the origins of the universe, the composition of matter, and creating new art narrations. Out of enthusiasm for ancient Egypt and hieroglyphs, his gods are reminiscent of monumental ancient Egyptian sculpture.

The opening of the exhibition was scheduled for mid-March 2020. The critic situation the world is facing (Covid-19) during this period only confirms its relevance. The Chernobyl victims witnessed a new catastrophe.

Life is beauty, basic foundation of the energy it creates. For someone it is a god, for many it is pure abstraction. The mud turns into soil the moment a plant grows out of it. Three heads float in red broth. One has its mouth closed, another has covered ears, the third has stitched eyes. Blissful ignorance seems to be a survival technique for many of us, but at the same time we close our eyes to the reality of existence. We live between cold stone and mud. We do not want to hear the truth, nor do we want to speak it out loud, especially once we realize that life is nothing but the opposite force of cold. Life is an endless battle. Surrounded by a black plastic tube clamped in industrial steel. In this way the heads are framed, in this way our existence is surrounded: after the umbilical cord we feed from the eternal universe of life. We bloom in wombs. When we are separated from our mothers, we are free, we have severed our connection to the source of life. From that moment on, life is ours.

Death pulls us forward. Ignorance becomes blissful when we learn to look away from the abyss. As children, we close our eyes and do not talk about it, we do not want to be reminded of the truth that says our existence is essentially a rebellion against the dead elements from which we are born. Our fear increases the ignorance of the eternal life that surrounds us, it seems that the very existence of life around us is not enough to believe in our own power or in a universally overflowing life force. This power cannot be described in words: we call it God. We naively give him our idea of ​​him, we choose his name, face, family, fairy tales…
Eternal life is imprinted in steel, compacted, torn, poisoned, burned… But it will never cease to exist. It will never be locked or shut down because of our inventions, not even because of the ultimate cataclysm. Chernobyl.

Rok Mohar (Ljubljana, 1979) graduated at the High School of Printing and Paper; in 2003 he enrolled at the Famul Stuart School of Applied Arts, majoring in sculpture. In 2006 he got an atelier in AKC Metelkova. His artistic path was significantly marked by his friendship with the artist Marko A. Kovačič, with whom he still collaborates today. He has participated in solo and group exhibitions and works in various fields. He made props and sets for theatre and film, collaborated with the restoration centre at the Department of Stone and Stucco, portrayed comic book heroes, participated in various sculpture symposia and festivals, including the 3rd and 4th International Festival of Student Forma Viva ( 2005 and 2006) in Izola. He studied stonemasonry at the sculpture workshops of Kornari in Marušići in Croatia with a mentor, academic sculptor Gail Morris. In 2019, with the help of the KUD Ampus association, he established a graphic studio in Tržič in the Neuhausen manor. He lives and works in Ljubljana and Tržič.