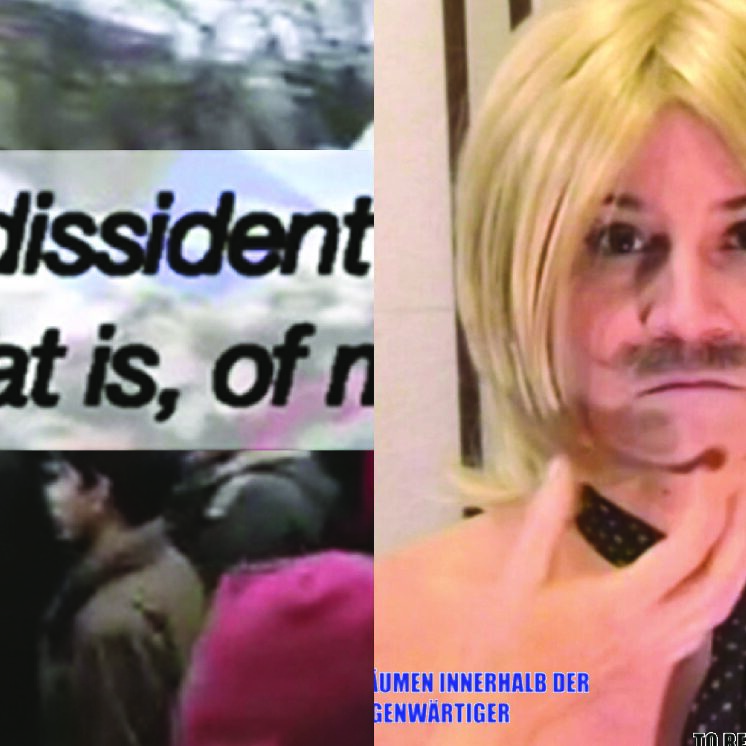 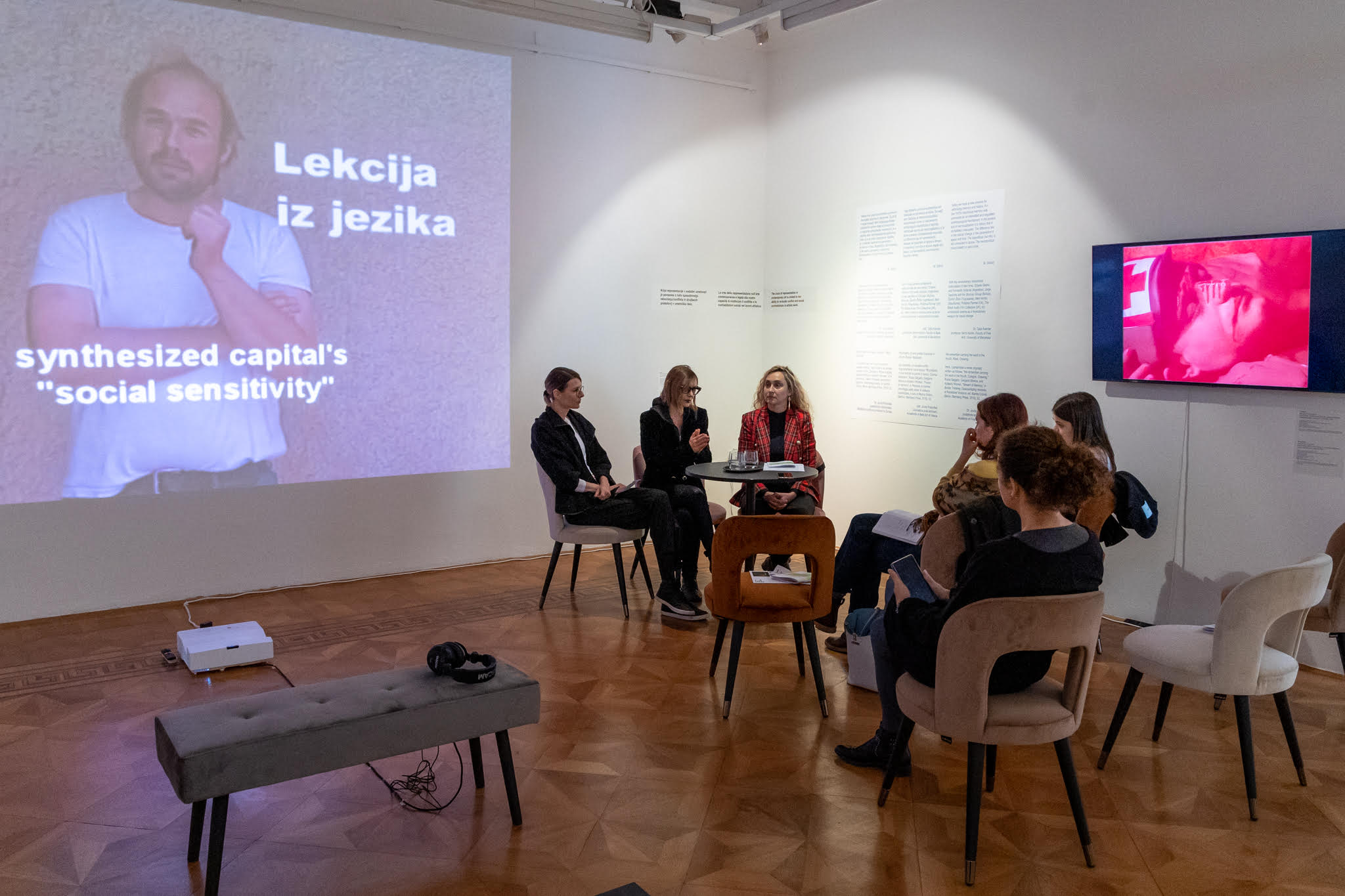 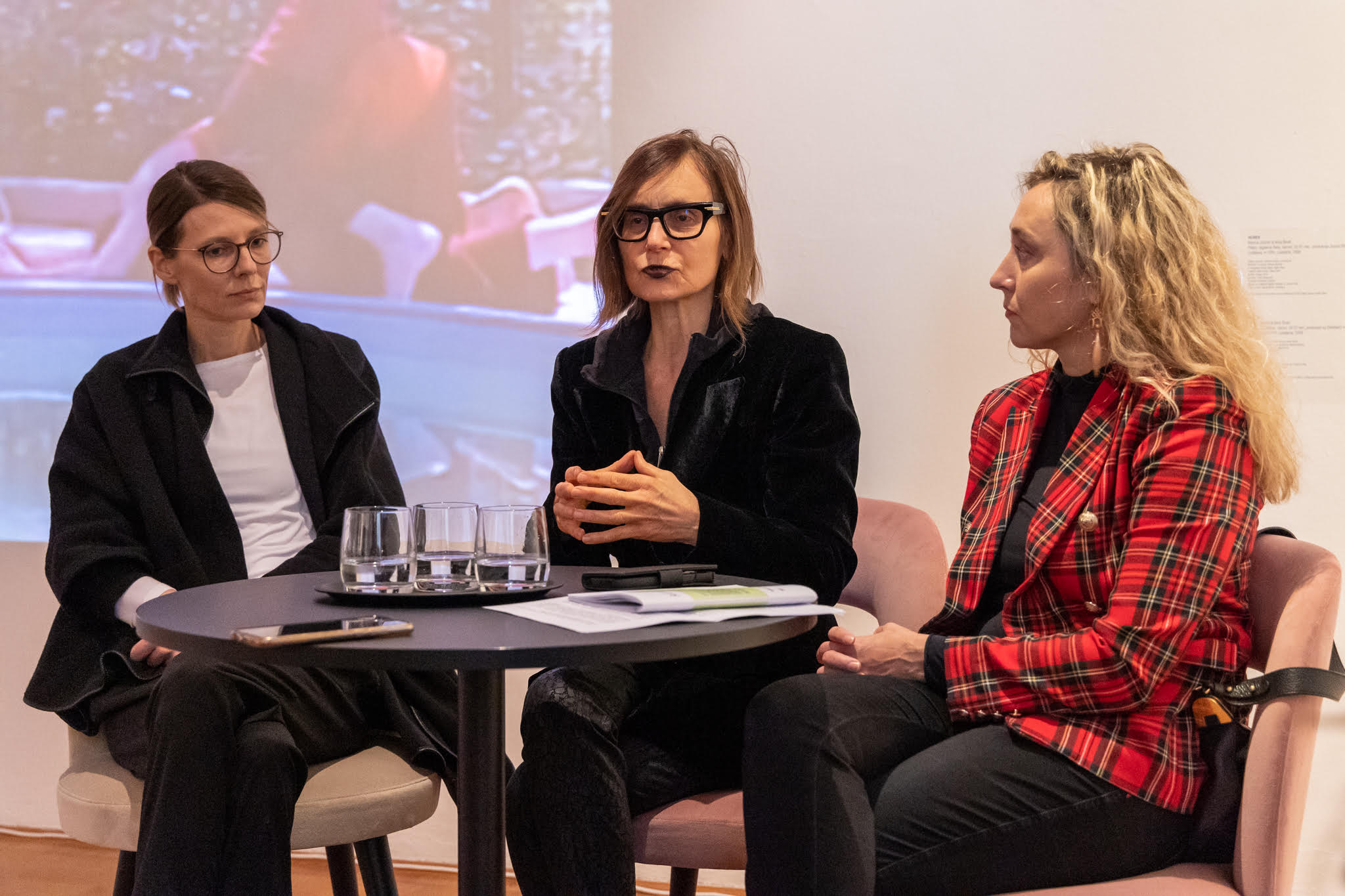 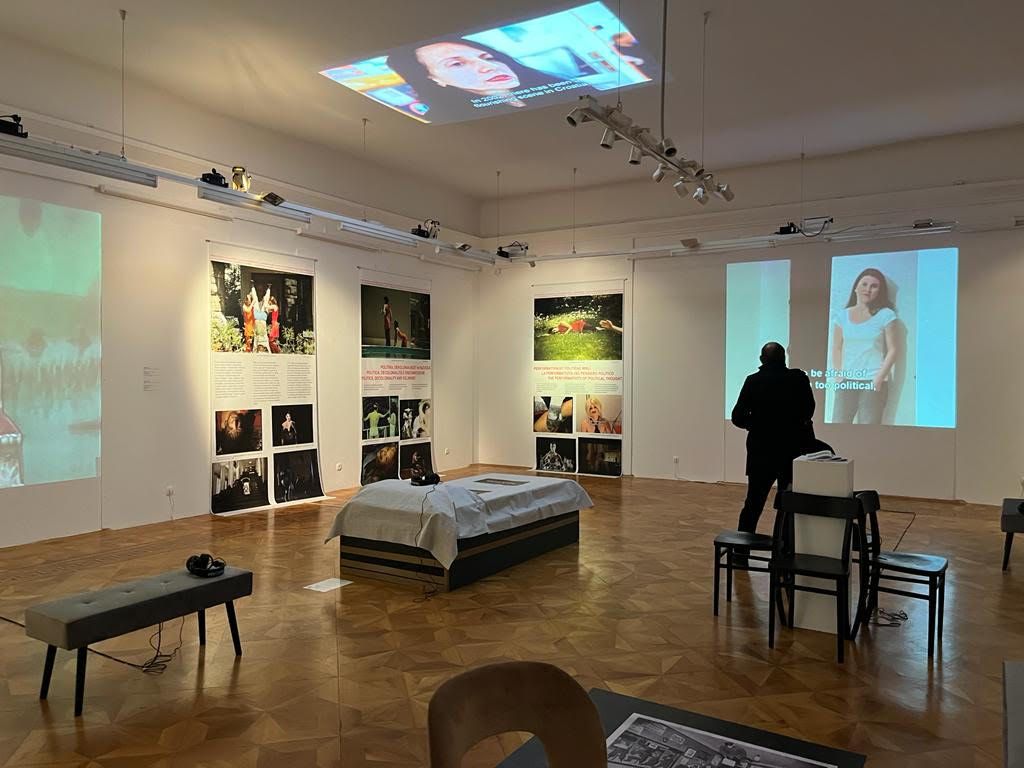 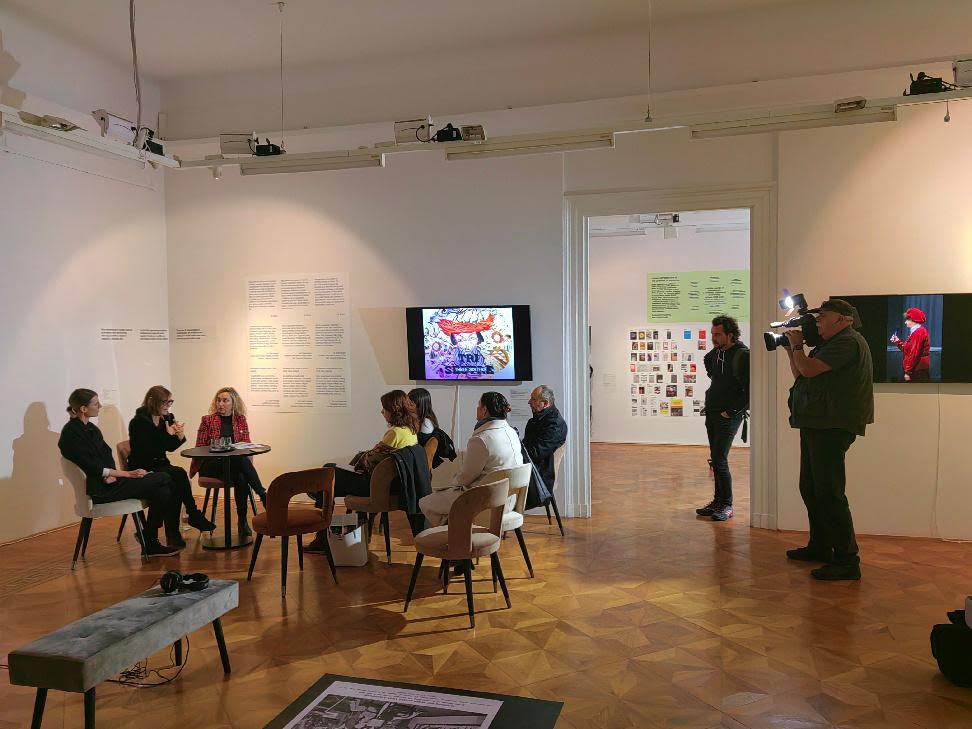 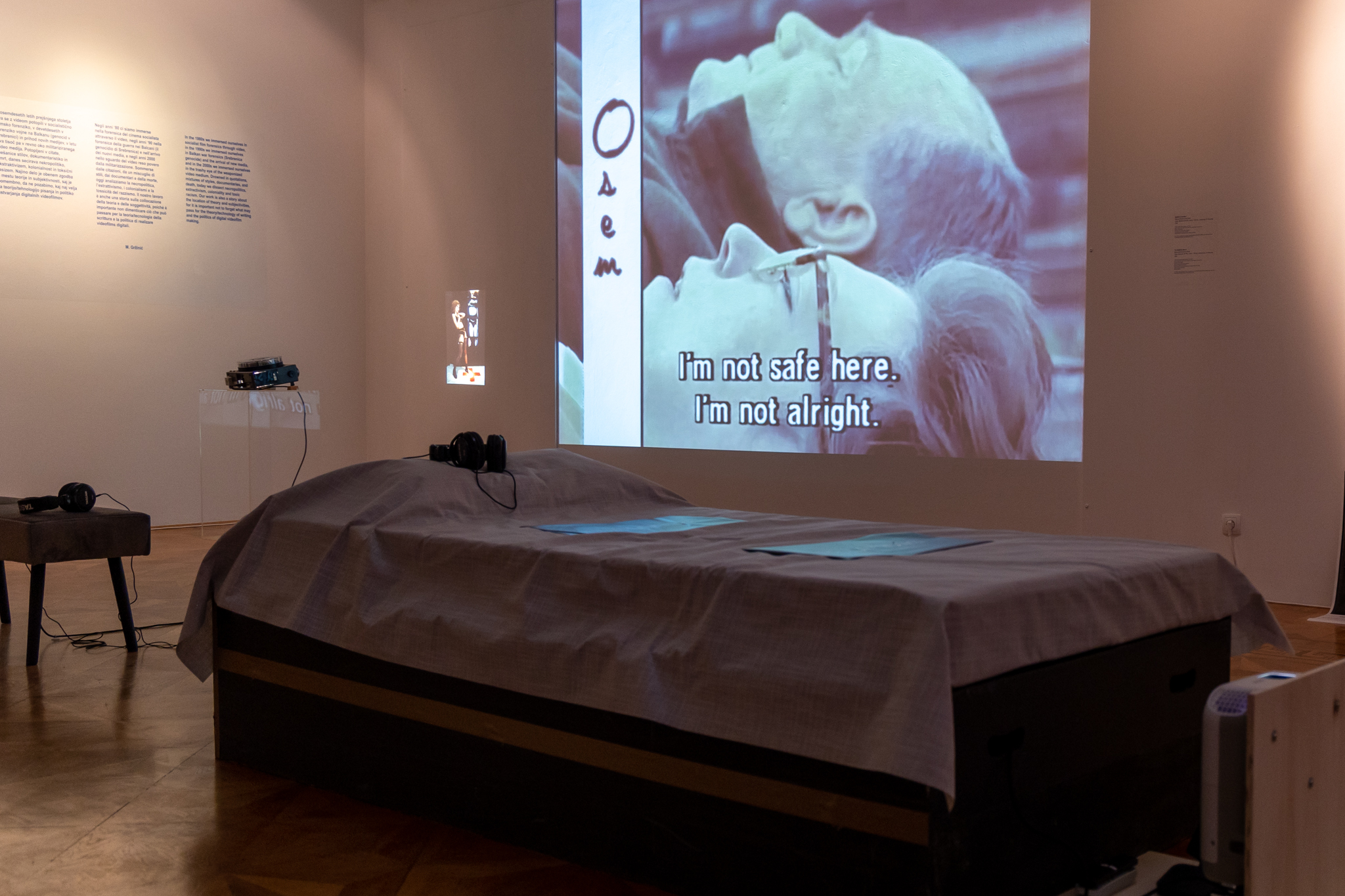 On Friday, November 25, 2022, at 6 p.m., we kindly invite you to the opening of the show DISSIDENT HISTORIES by MARINA GRŽINIĆ & AINA ŠMID, which will take place at the Loža Gallery in Koper. On the day of the opening, on Friday at 10:30 a.m., a press conference will be organized for journalists and the general public, in the presence of the two authors. In dialogue with the audience, they will present their unique and complex project, which has been developing throughout this past year.

The project was produced by Piran Coastal Galleries, with the support of the Ministry of Culture of Slovenia, the Municipality of Koper, the City of Piran, ZRC SAZU – Research Centre of the Slovenian Academy of Sciences and Arts, and with the benevolent support of the Koper Theatre. With this exhibition, we are celebrating forty years of the immensely fruitful and successful joint creative path of Marina Gržinić and Aina Šmid, whose works represent the milestones in the experimental video artistic medium.

The artists turned video into a political medium and aesthetics into mass culture, thus transforming the ways how the field of words, images and performativity intertwined. In the 1980s, they paved the artistic path of Ljubljana's alternative scene and represented Slovenia  at important experimental film, video and new media festivals in the 1990s. These include International Short Film Festival in Oberhausen, Germany, the World-Wide Video Festival in The Hague, the San Francisco International Film Festival, and large-scale retrospective projects at the Museum of Modern Art (MOMA) in New York, the Centre for Art and Media (ZKM) in Karlsruhe, Germany, and many others. The authors have been working with video since 1982, more about their journey here.

Their stories are positioned at the intersection of documentary and fiction with the aim of introducing new tactics of performative action. The videos are conceived in such a way that they reveal the processes of social contradictions, racial discrimination, and expropriation by the capital. Gržinić & Šmid warn us about the necropolitical aspect organised by the European space. In their work entitled “Čista svoboda/Pure Freedom” they explain that the present-day globalisation is the main cause of wars that are driven by the global capitalistic “First World”. The latter fails, however, to recognise the complex set of effects that this system has on different spheres of its own societies, such as culture and education. One of the most important suggestions in their work is that we recognise the appropriation of the visual by the post-industrial, digital, economic, and political system and place the political fight in its appropriate place.

At Loža Gallery in Koper, they are not hosting a retrospective, but rather a re-articulation of the existing state in video production in the national context. It is not only their first presentation at Piran Coastal Galleries, but also their first show in a Slovene public museum. They will show various artworks, which will include audio-video works, printed posters, installations, projections, and a rich book collection.

In conjunction with the exhibition, an accompanying program will be organized, which will include guided tours and meet-and-greets with the artists, where the public will be able to gain an insight into the duo's decades of creating. The first guided tour/talk will take place on Wednesday, December 7, 2022, at 5pm. All subsequent meetings will be announced in the monthly lists of events, online and on Facebook. The exhibition will run until Tuesday, February 28, 2023.

A trilingual printed brochure was also published for the occasion, which also contains a short essay by Prof. Tjaša Kancler and other rich material on female artists. The brochure is published on this link.

More on the artists

Aina Šmid is a graduate art historian and independent cultural worker. Marina Gržinić is a philosopher, theoretician and artist from Ljubljana. Since 1993, she has been employed at the Scientific Research Centre of the Slovenian Academy of Sciences and Arts. She has also been a full-time professor at the Academy of Fine Arts in Vienna since 2003, frequently publishing and lecturing all over the world.

he authors have been working with video since 1982. They have participated at numerous video, media, and film presentations and been the recipients of numerous awards. In 2003, the International Short Film Festival Oberhausen in Germany showed their retrospective entitled MARINA GRŽINIĆ / AINA ŠMID (1985–2003). In 2011, Galerie D.O.R. in Brussels ran their retrospective entitled MARINA GRŽINIĆ / AINA ŠMID, 30 LET: 26 DEL V 5-ih DELIH / MARINA GRŽINIĆ / AINA ŠMIT: 30 YEARS: 26 WORKS IN 5 PARTS (a projection of video works from 1982 to 2011). In 2017, Kunstraum Lakeside in Klagenfurt hosted a grand exhibition of new works and installations entitled Marina Gržinić in Aina Šmid – RADIKALNA SODOBNOST: pregled 35 let dela (1982–2017) (Marina Gržinić and Aina Šmid – RADICAL CONTEMPORANEITY: a review of 35 years of work (1982–2017)), curated by Aneta Stojnić.