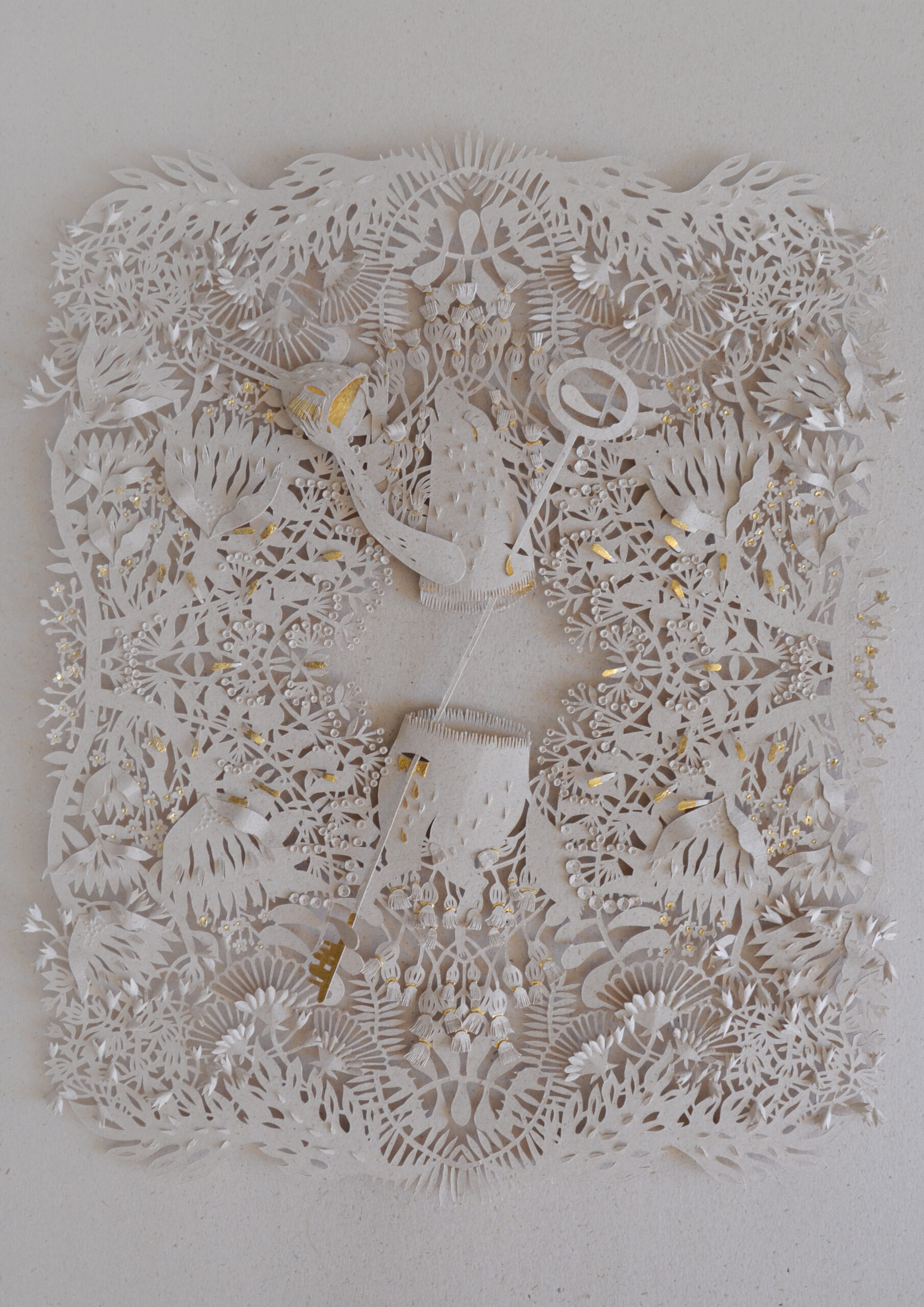 Lara Jeranko Marconi (Koper, 1984), a painter and illustrator from Koper, received her artistic training at the Academy of Fine Arts in Venice. In Slovenia, she belongs to the select few exceptional visual artists of the younger generation. She had an opportunity to work with the famous artist Raymond Pettibon at the 52nd Venice Biennale, which was very important for her creative growt. She held her first personal exhibition in Slovenia at the Insula Gallery in Izola in 2008.

Ten years later, she participated in the international group exhibition Maravee Mind in the Loža Gallery in Koper. Lara Marconi Jeranko is a promising artist who, at a certain stage of her artistic self-searching, replaced the paintbrush with scissors and papercutting became her trademark. Her current personal exhibition is also an expression of this intriguing art genre.

Works selected for the exhibition were created in the period of the last five years (2018-2022) and are included in various thematic cycles, which carry telling titles such as: Icons, Relics, Portraits, Tapestries, Correspondence, Folders… No less significant or crucial is the title of the exhibition: The Fool. In the Tarot, The omnipresent figure of the Tarot cards, the Fool  also inhabits the magical world of Lara’s images.

The author depicts him as a humanized animal being, an amiable wolf, which in its many transformations enters a complex sequence of events on wall and spatial tapestries, in filigree woven relief paper structures, and in softly embroidered images on canvas and drawings.

In a series of 21 drawings titled Blue tarot, the fool personifies purity of spirit, joy, happiness, positive mood. The next moment, however, he can unconsciously slip into despair and a premonition of his own end. In a way, he preserves the image of a tragic character, which illustrates a person’s journey through life, full of various experiences.

Lara’s world of plant arabesques and humanised animal figures is often narratively condensed on monochrome two-dimensional surfaces, where a dramatically compact  content unfolds in the central circular composition. In these postmodern herbariums, which remind us of the oneiric world of the Dutch Renaissance painter Hieronimus Bosch, the inaudible vibration of plants can be felt. In the feverish energy of imagination, these plants host, grow over, intertwine with, or swallow the mute inhabitants of spatially and temporally indeterminable spaces, the artists’ imaginary landscapes.

Animal beings with human features are in a state of constant transformation, of moulting, like some kind of hybrids that hide the image of another animal species under the guise of their present one, thus evoking conflicting emotions in the viewer.

Undisguised admiration alternates with a sense of unease, as with subtle elegance they reveal extremely cruel acts: animal bodies cut in half, pierced with a spear or even quartered, with their individual pieces possibly appearing in another cycle.

We reference here the part of the installation entitled Relics, which recalls the cabinets of curiosities (Wunderkammer) popular in the 16th and 17th centuries. These are privileged spaces in which interesting, and above all, rare finds of objects and heterogeneous items of natural origins were stored, with the aim of promoting ideas about new, different perspectives of the world.

In the aforementioned cycle, we therefore find the precious remains of deceased living beings, which, together with the botanical collection of rare plants, are carefully classified in glass reliquaries. The seemingly normal context with elements of the absurd, which we perceive in the work of the coastal artist, requires the viewer’s attention and collected observation.

In fact, it is a rather unusual approach in modern times of fast and superficial consumption of everything, not just of images. Lara’s fragile paper creations, imbued with lyrical sadness through which caustic irony flows, speak of the mysterious nature of life and man’s relationship to the world.

They allude to the generic and variable power of art; they are like some kind of talismans, living entities, with the magical ability to influence, transform the individual and thus the entire world.