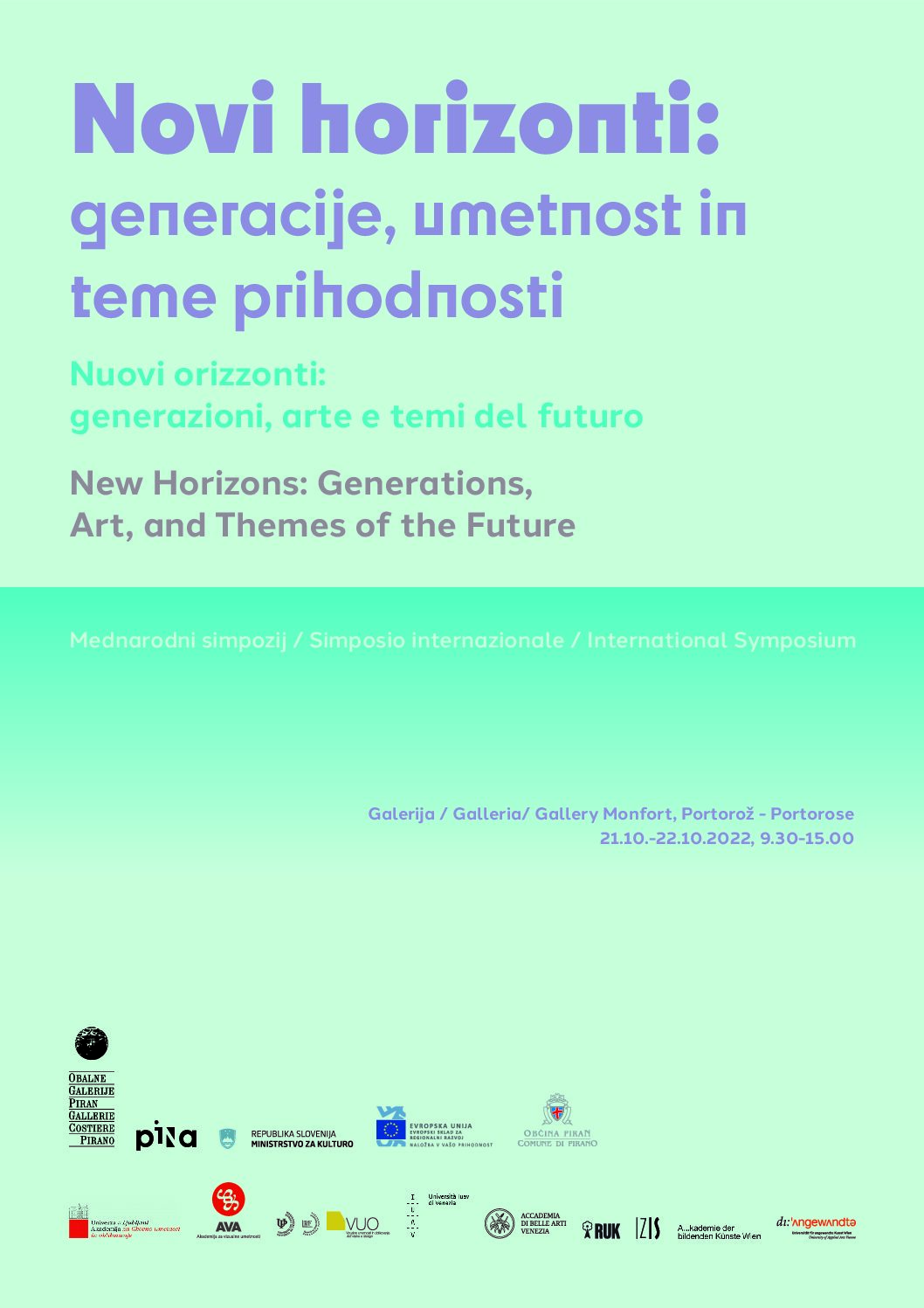 New Horizons is an international symposium that explores the future of art in the new millennium through the lens of multimedia and interdisciplinary collaboration and creation. The symposium will be held at the Monfort Gallery on Friday, October 21, 2022, and Saturday, October 22, 2022. The programme will consist of in-person lectures and discussions with domestic and international guests, including established authors, artists, professors, and cultural experts (from Slovenia, Italy, Croatia, and Austria).

Guests will present novel perspectives on the current state of the art and creativity systems. The contributions of the authors will address the symposium's guiding questions. What role do new generations of contemporary artists play in times of profound technological and social change? What is the significance of supporting institutions in the processes of creation and education of art in the 21st Century? Today's visual art is profoundly socially and economically exposed: how will future generations deal with the instrumentalization of their freedom of expression? We will delve into the minds of new generations of creators who draw inspiration and modus operandi from the horizons, approaches, and themes that define artistic creation in the new millennium.

The international symposium is aimed at professionals and enthusiasts of contemporary practices. The event will be held in English due to its international nature. The symposium's key lectures will be introduced in Slovenian.

The symposium was organized as a result of strategic collaboration between the Piran Coastal Galleries and the Association for Culture and Education PiNA. It is an example of good inter-institutional cooperation between local actors: Piran Coastal Galleries, as the central public institute for contemporary art in the Primorska region, and PiNA, the founder and producer of IZIS, an unique festival of intermedia art in Istria.

The International Symposium is part of the accompanying programme of this year's 10th edition of the IZIS Festival (September, 23 – October 16, 2022, Libertas Warehouse, Koper) and the group exhibition NEXT GENERATION (October 21 – December 30, 2022, PCG, Monfort Gallery, Portorose).

As part of the symposium's day one, we invite you to the opening of the NEXT GENERATION exhibition, which is dedicated to students from eight art academies and visual arts programs (Venice, Koper, Ljubljana and Vienna).

It is an honor for the organizers to be invested with a special dedication to the authors of the younger generation and to reflect on the significant professional and popular developments that the arts and creativity sector is experiencing in these extraordinary historical times.

Marjetica Potrč is an artist and architect based in Ljubljana. Her work emphasizes individual and community empowerment, problem-solving tools, and strategies for the future that transcend the neoliberal agreement and testify to the failures of modernism. She has exhibited extensively throughout Europe and the Americas. For the 23rd Biennale of Sydney (2022) she created a new installation centered on river rights. She has been a professor of participatory practice at the University of Fine Arts/HFBK in Hamburg (2011–18) and a visiting professor at both the Massachusetts Institute of Technology (2005) and the IUAV Faculty of Arts and Design in Venice (2008, 2010). She is the recipient of numerous grants and awards.

Clarissa Ricci is an Associate Professor in the Department of Art at the University of Bologna. Her research is primarily concerned with the history of exhibitions, biennials, fairs, markets, and modernity. She was awarded a Getty/ACLS postdoctoral fellowship in Art History (2019-2020), having previously been tasked by the Iuav University of Venice (2017-2019) with researching the origins of Arte Fiera. She was also a visiting scholar at Columbia University in New York, and the Getty Research Institute in Los Angeles awarded her a library research scholarship. She is the author of APERTO 1980-1993. La mostra dei giovani artisti alla Biennale di Venezia (Postmedia Books, Milano, 2022) and many essays. She was the editor of several books, including Starting from Venice. Studies on the Biennale (2011) and Double Trouble in Exhibiting the Contemporary: Art Fairs and Shows (2020). She is also the founder and editor of the academic journal OBOE Journal On Biennials and Other Exhibitions, as well as the editor of Venezia Arti.

Marina Gržinić is a philosopher, theoretician and artist from Ljubljana. Since 1993, she has been employed at the Scientific Research Centre of the Slovenian Academy of Sciences and Arts, and today she works as a professor and scientific advisor. She has also been a full-time professor at the Academy of Fine Arts in Vienna since 2003, frequently publishing and lecturing all over the world, and has been involved in video and media art since 1982. In 2007, she received the SASA Gold Award for her scientific work. Gržinć’s theoretical work focuses on contemporary philosophy and aesthetics after modernism. It is concerned with ideology theory, technology, biopolitics/necropolitics, video technology, and transfeminism in relation to decoloniality.

Domen Ograjenšek holds a degree in Philosophy at the Faculty of Arts in Ljubljana and works in the field of contemporary art as a writer, art-critic, researcher and a curator. He is a former editor at ŠUM journal and its research collective and former member of the editorial office for culture and humanistic sciences at Radio Student, where he worked as an editor of Art-area – a one-hour radio show on contemporary art. In his research, he focuses on both the classic German and the modern French philosophy, searching for their dis/continuities as well as their meaning for the epistemology of contemporary artistic practices. Currently, he is a PhD student at Academy of Fine Arts in Vienna. He is curating the U30+ annual open call by Aksioma | Institute for Contemporary Art, Ljubljana, to support new productions by young Slovenian artists under 35. Established in 2013, this program aims to intervene in the gap between school years and the professional world, and to investigate emerging trends, topics, languages and formats within the panorama of the Slovenian contemporary art.

Tadej Droljc (born 1981) is a Slovenian interdisciplinary artist and creative coder who works in the field of electronic music, computer-generated audio-visual composition, and other forms of intermedia art. His most recent work is concerned with what he refers to as a pluralistic approach to real-time audio-visual composition, in which different hierarchies of sound and image coexist within individual compositions. He holds a PhD in Audio-visual Composition from the Center for Research in New Music (CeReNeM, UK) under the mentorship of Dr. Alexander Harker and Prof. Pierre Alexandre Tremblay (with the support of a scholarship from the Ministry of Culture of the Republic of Slovenia). Tadej recently received the Lumen Prize Student Award, the Dennis Smalley scholarship for electroacoustic music, and the award for the most promising video artist at the Madatac festival for his recent work. The work from his joint project Synspecies received the Edigma Semibreve award and was shortlisted for the Lumen award in the category of moving images. Tadej has performed and exhibited his works at festivals or galleries around the world such as Ars Electronica, L.E.V. Festival, Brighton Digital Festival, Marché du Film – Festival de Cannes, Semibreve, Kapelica Gallery, Madatac or Athens Digital Arts Festival, among others. With the Synspecies project, he also became a member of ENCAC – European Network for Contemporary AV Creation. He is currently working with Futurelab Ars Electronica on the Immersify project.

Nika Erjavec works in the fields of research intermedia art, theatre, photography and design. She graduated from the Department of Unique Design at the Academy of Fine Arts and Design in Ljubljana in 2017, and she is currently pursuing her master’s degree in the Department of Sculpture. She has primarily studied the perception of vibration and sound in recent years, from its materiality to the hyper-objectivity of environmental changes at the level of the acoustic landscape and beyond. For her series of installations (in)VISIBLE and hybrid artistic research, she was awarded the student Prešeren Award ALUO in 2019 and was nominated for the University Prešeren Award. She showcased herself with independent intermedia exhibitions in the Alkatraz Gallery and the Mala galerija BS over the past year. She actively participates in regional and international exhibitions throughout her academic years. As a set designer, prop designer and photographer (Bronze Medal of the Serbian Photographic Association 2017) she occasionally works in theatre (SNG Ljubljana, MG Ptuj, MGL, SNG Maribor). Simultaneously, she attends workshops both at home and abroad, and she prepares and leads workshops on cultural accessibility, sensory and material potentials, and contemporary environmental and social contexts.

The artistic couple GORGON URBAN is focused on performative actions in public space. Assembler is an audiovisual artist, creative coder and music producer based in Austria (assembler.live). Robo Mihaly is dokumentarist based in
Slovakia.

M.Sc. Sebastian Konzett (1996, Vienna) is a digital artist focusing on 3D modeling and animation. He is currently studying Post Conceptual Art Practices at the Academy of Fine Arts in Vienna and has a scientific background in biology and especially evolutionary anthropology (University of Vienna). In his interdisciplinary work between science and art, he deals with topics that address various developments in society and their global impact on nature and livelihoods.