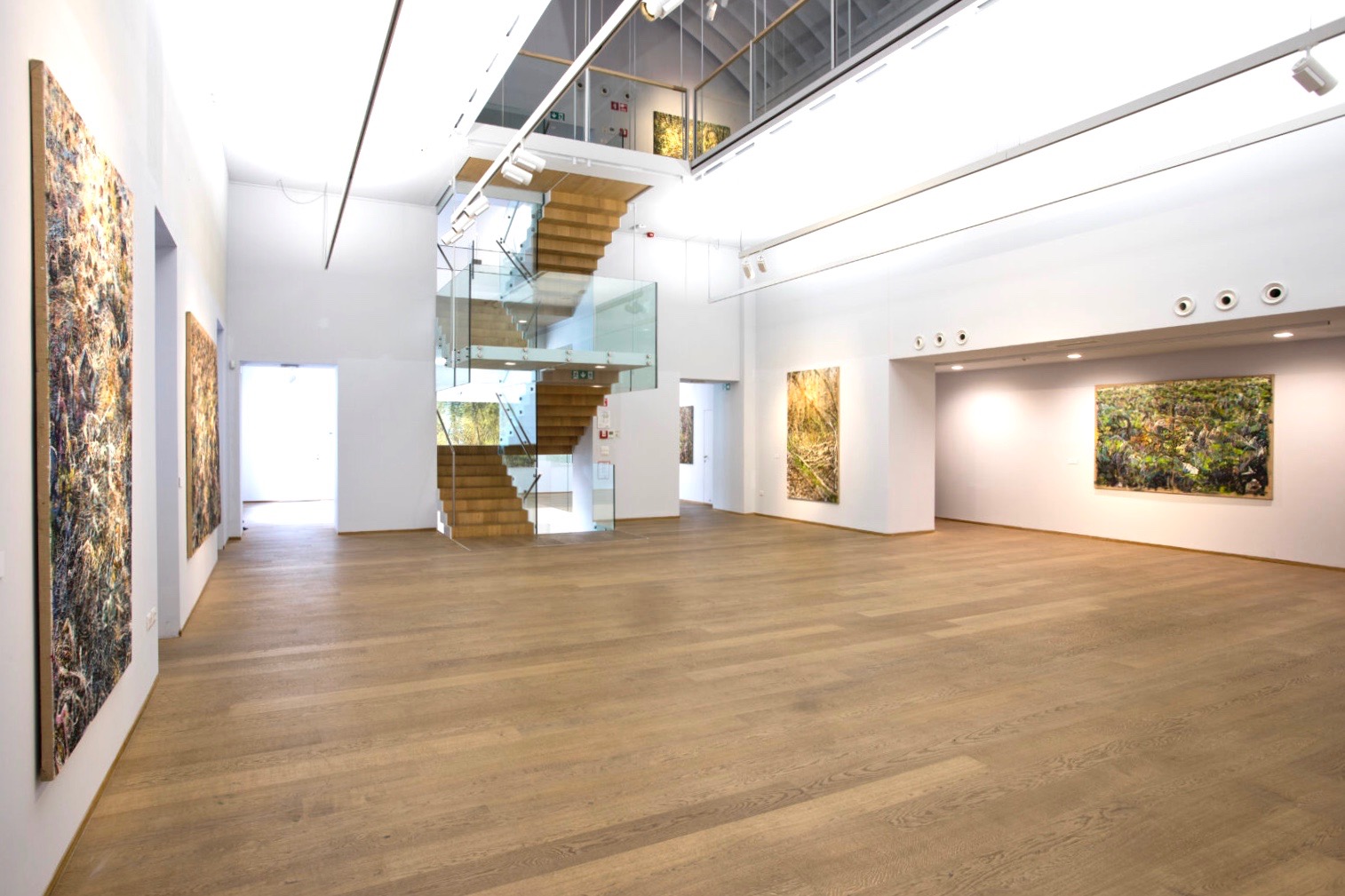 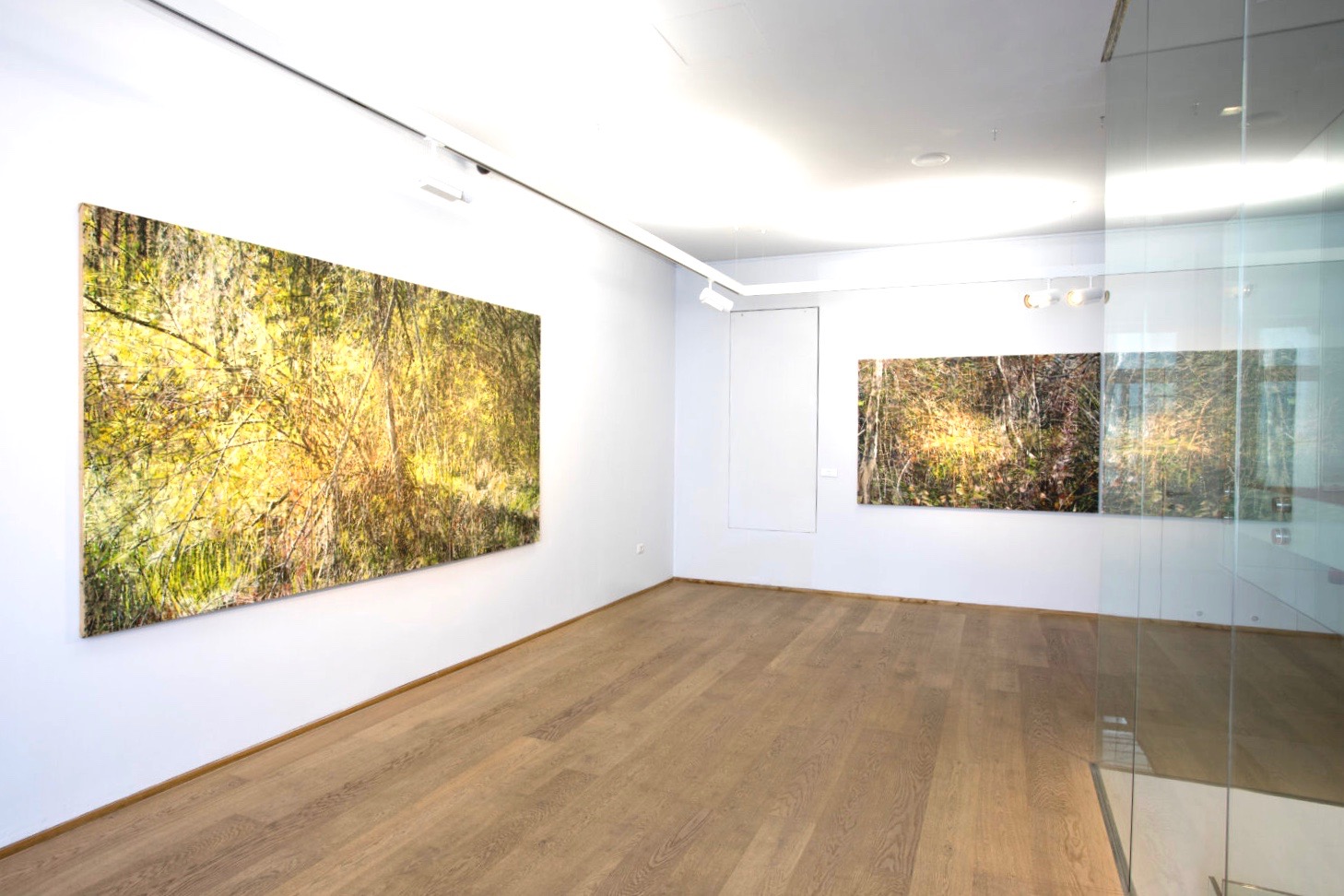 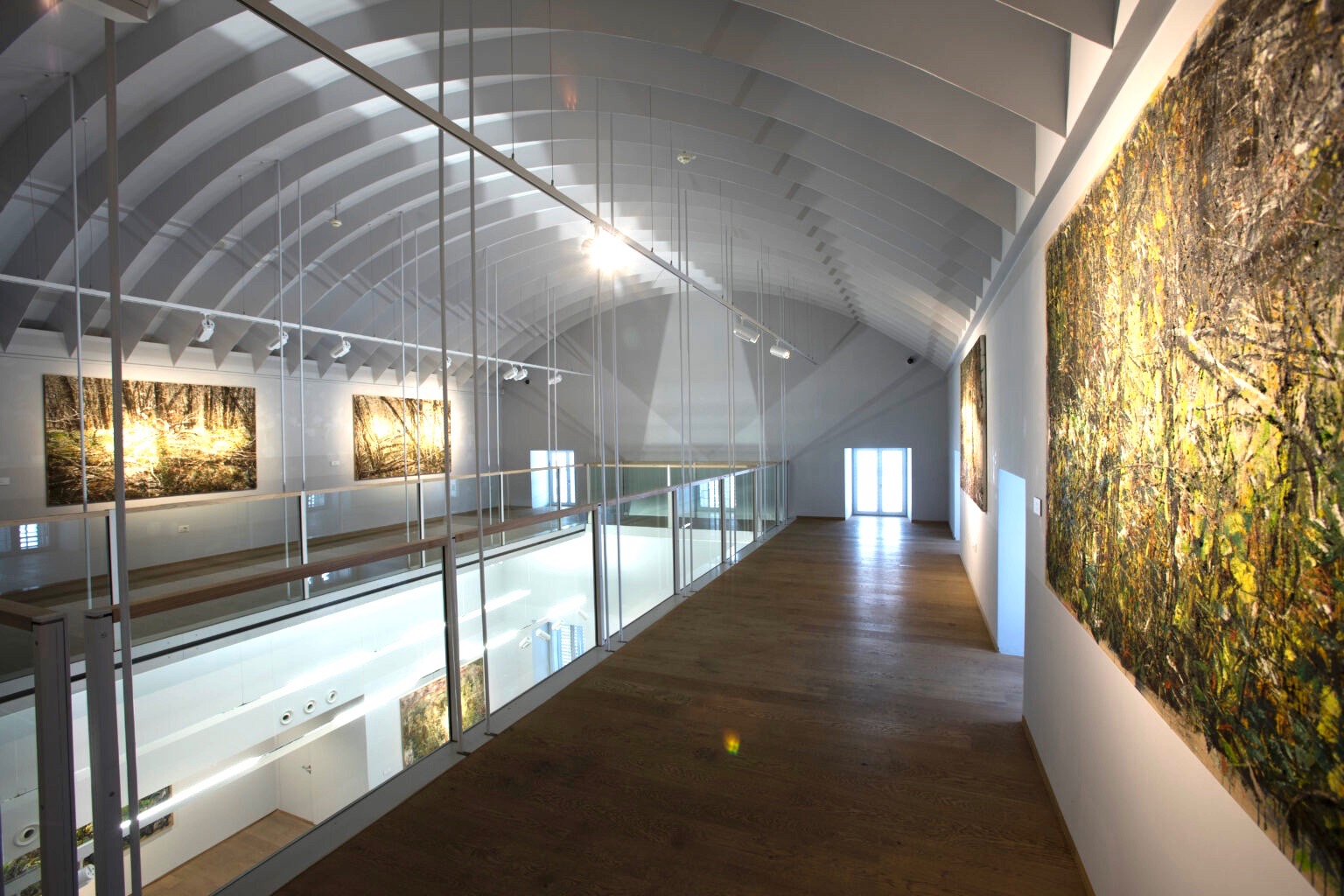 Anja Jerčič Jakob is a painter and graphic artist of the middle generation of Slovenian artists, and since the beginning of her artistic path has focused her attention on nature and its various manifestations. She transforms the admiration for nature into images of various formats, using different media, which sometimes turn into the physicality of living plants and objects. In her “sensual clarity, form and materiality", she reminds us of the fragile existing balance between man and nature and how conscious the process of environmental exploitation is.

In her work, Jerčič advocates for the power and the directness of painting. She is aware of the overabundance of images, the so-called universal aestheticization of the world, which floods our real and virtual world on a daily basis. Painting struggles to find its rightful place and risks to lose touch with the symbolic, metaphorical, and representative values of art. Therefore, her choice of using traditional techniques, like egg tempera, with which she manages to render the suggestive power of the pigments, showing invisible things, producing visual enigmas. Thus, she encourages us to look beyond the self-evident and try to grasp the presence of a different, parallel world, dominated not only by appearances, but by a deeper and more intimate reflection. Jerčič finds a way to convey in us the feeling of necessity for the resurgence of painting.

In a series of recent paintings, Anja depicts the forests of the Polish landscape. She focuses on heir neighbourhood, on the periphery of the city; Periferija is also the title of the exhibition. The landscape is characterized by the presence of cabbage heads, an element that often recurs in still lifes. This motif bears also symbolic and personal meanings, dating back to her mother’s childhood, when she looked at old postcards representing children playing between the cabbage fields. At the beginning of last century, this was one of the methods used by orphanages to encourage wealthy middle-class couples to adopt orphans. This pictorial interpretation of childbirth – cabbage has always been considered a symbol of fertility – is often found in modern and ancient visual culture. In Vittorio De Sica’s neorealist masterpiece Miracolo a Milano, Totò emerges in a field under a cabbage head. This scene was remembered by a painter's acquaintance when he first saw her paintings.

The flooded fields of cabbage heads are depicted during the offseason, when they are infested by harmful weeds, which bear a symbolic value of resistance and rebellious presence, fighting human domestication and showing the power of wild nature.

The core of the exhibited works regards the forest ecosystem and the aspects of it that are often overlooked and ignored, like the decaying trees, the branches of fallen leaves, the gnarled trunks. These details stand out as the main objects of her paintings, catching the curious gaze of the spectator.

The leitmotif is painted on different scales and dimensions; what remains persistent is the power of nature. Are the decaying tree logs the result of climate change, or are the human interventions to blame for the end of their life cycle? For, as Peter Wohlleben notes in The Secret Life of Trees, the rule of the stronger reigns also in the wild forest. The rapid and energetic growth comes at a price, as the balance of power between growth and defence often upsets the balance, resulting in the collapse of a singular species. The tree log defends itself from strong winter storms for a while, until it is no longer able to: the trunk breaks, and the life of the tree ends. But with this, the work obligations of the tree are not over yet, its rotting trunk becomes the home of a more demanding living community and plays an important role in the forest ecosystem for centuries. In her paintings, Jerčič also hints “at ambivalence, at the tension between rotting, decay, passing away and the possibility of re-emergence. Rot bears the potential to live again,” as she writes.

If the early works were focused on details of flourishing trees, the last artworks are dedicated to the processes of change, renewal, growth, and disappearance. However, the author was able to imprint elements of dramatic tension as romantic painters did before her. Nature: magical as an illusion and threatening as a nightmare.

The forest scenes are painted in a soft atmosphere of brown, dark green and reddish tones, with reflections of subtle white and grey accents. With a skilful use of colours and expressive brushstrokes, she is able to capture the current and at the same time eternal mood in the images, in which light sublimates physicality and vital energy. The flow of light and layers create dynamism and remarkable depth to the images. These are also inspired by photographs, and in various stages of the creative process the author also uses the dripping technique, which creates a highly effective visual impression of flickering, movement, and crawling.

In these stunning images, the power and the soul of nature are revealed, which remains pantheistical and mysterious, inaccessible to man. They are places of deaf silence, where the exploration of the exotic side of nature retreats to personal mood and self-reflection. Despite their direct and descriptive titles (Rašica, Ob Savi…), these images can also be perceived as an archive of inner landscapes that preserve the artist’s memory, who thinks at that authentic nature into which mankind has not yet intervened.

Anja Jerčič Jakob (Slovenj Gradec, 1975) graduated at the Academy of Fine Arts and Design in Ljubljana, where she completed her painting studies in 2000; two years later obtained a master's degree in graphics and ultimately a master's degree in painting (2007). Since 2016, she has been employed at the Faculty of Education, University of Ljubljana as an assistant professor of painting. With her works, she is actively present in Slovenia and internationally, both in exhibitions and in many public and private collections. She lives and works in Ljubljana.
MBJ